Even after the end of the summer, the consequences of the low water levels in the Netherlands were still having an impact. The costs of inland navigation are rising, and Arnhem cannot be reached by passenger ship because these ships need a greater draught. In addition to inland navigation, the low water levels also have an impact on industry. Machines can no longer be cooled due to a lack of cooling water. Eekels Pompen provided the solution last week when it set up a temporary pump system on the Lower Rhine.

As a result of the low water levels in the Lower Rhine, our customer could no longer pump up water from an adjacent harbour. Normally, the water from the harbour is pumped into the cooling system where the cold water absorbs heat from the machines. Without the cooling water, there was a chance that production would have to be halted.

The harbour was temporarily closed off and pumped full of water from the Lower Rhine using a temporary pump installation. The Eekels Pompen team installed heavy-duty submersible pumps with a pipe bridge and other pipework. Thanks to the pipe bridge, the pipes have no effect on through traffic in the area. Last Sunday, we received a message that production was in danger of being halted, and within a few days, a working pump system had been installed in the harbour. Is your production process in danger of being halted due to low water levels? If so, our specialists will be happy to help by quickly putting together a pump solution for you. Contact us directly on. 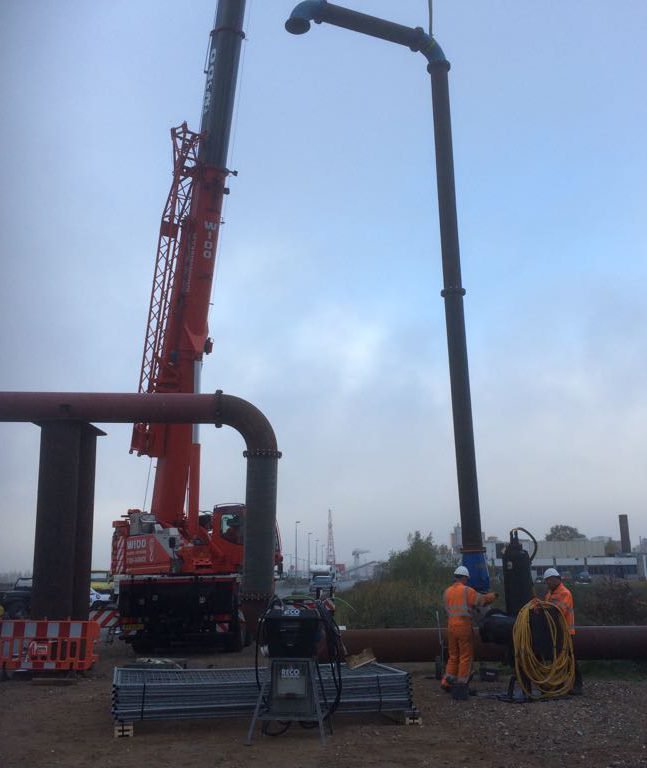